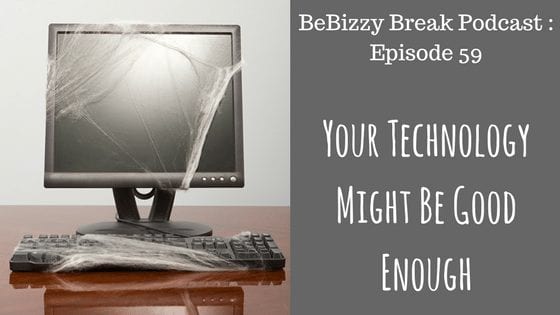 On Episode 59 of the BeBizzy Break Podcast, we talk about the passing of another geriatric internet property, Compuserve, a renewal of the browser wars with Firefox Quantum, and why your technology is good enough.

Your current tech is good enough

Talk about no huge leaps forward, computers have remained pretty constant for many years

I know, it seems weird that a web development company would tell you that your website is good enough. There ARE times when it’s best to update the website like when you need :

We are constantly hit with marketing messages on stuff you “NEED” to ensure you have the most current technology or your life will be horrible. Vehicle enhancements like rear hatches that open with your foot, lane change chimes, and others are safety features, but really just being a better driver will fix that. 4K and 3D TV’s are wonderful, but there is little programming that takes advantage of the technology. VR goggles are fun toys, but again, there’s very little cool, productive programming for them. And voice controlled devices like Google Home or Alexa are neat, and have a utility to them, but often you have a device in your hands or pocket that can do the same thing.

I LOVE technology, and our economy relies on constant updating of computers, furniture, cars, homes and just about everything else. But sometimes saving that money for something else is your best bet.

Have any questions or suggestions on using current technology instead of buying new gear? Leave them below, or send them to me @BeBizzy on Twitter!