Why & How To Stop Using Internet Explorer 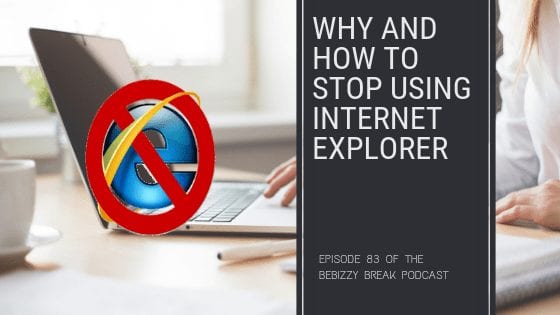 Back about a month ago it was announced that Internet Explorer security flaw allows hackers to steal files.

Security researcher John Page has revealed an unpatched exploit in the web browser’s handling of MHT files (IE’s web archive format) that hackers can use to both spy on Windows users and steal their local data.

The vulnerability affects Windows 7, Windows 10 and Windows Server 2012 R2 and allows some access to computer files by sending a simple command such as a CTRL+K (open a duplicate tab) or a Print command.

Page posted details of the exploit after Microsoft reportedly declined to roll out an urgent security fix. It instead said a fix would be “considered” in a future release. While that does suggest a patch is on the way, it leaves millions of users potentially vulnerable unless they either turn off Internet Explorer or point to another app that can open MHT files.

So, first… remove IE unless it is completely necessary for your job. Some government agencies, financial institutions, insurance companies, etc have websites or applications that ONLY work on Internet Explorer. Which is scary since it’s government info, your bank, CPA, insurance industry or other entity that stores private information.

But what are you supposed to use as a replacement? There are dozens of options, and we’re going to talk about a few, starting with the big three, and a few others.

I remember the old days (dating myself) when Netscape emerged as a new, robust applications that provided access to the World Wide Web, instead of BBS’s, usegroups and the all-powerful AOL. Microsoft came in a few years later and the two battled back and forth over market share.

IE finally finished Netscape off with IE6 with Windows XP, and at one time IE owned 90% of the browser market. Firefox started the new browser emergence, then Chrome began it’s climb to the top of the browser heap.

The most recent browser market share data in the US from Stat Counter : http://gs.statcounter.com/browser-market-share/desktop/united-states-of-america

Basic Security Policies Regardless of Browser

As a web developer and an “experienced” technical professional, it is great reminiscing about the history of Internet Explorer and what it has done to move the internet toward what we have today. But like MySpace, Hotmail, AOL and the Blackberry, Internet Explorer is something we should no longer use. There are plenty of great replacements that take a little bit of effort to install and configure, but security, speed and utility makes the time spent worth while.

Have any questions or suggestions on your favorite, or least favorite internet browsers? Leave them below, or send them to me @BeBizzy on Twitter!